1.My Background and Pupil Evacuation 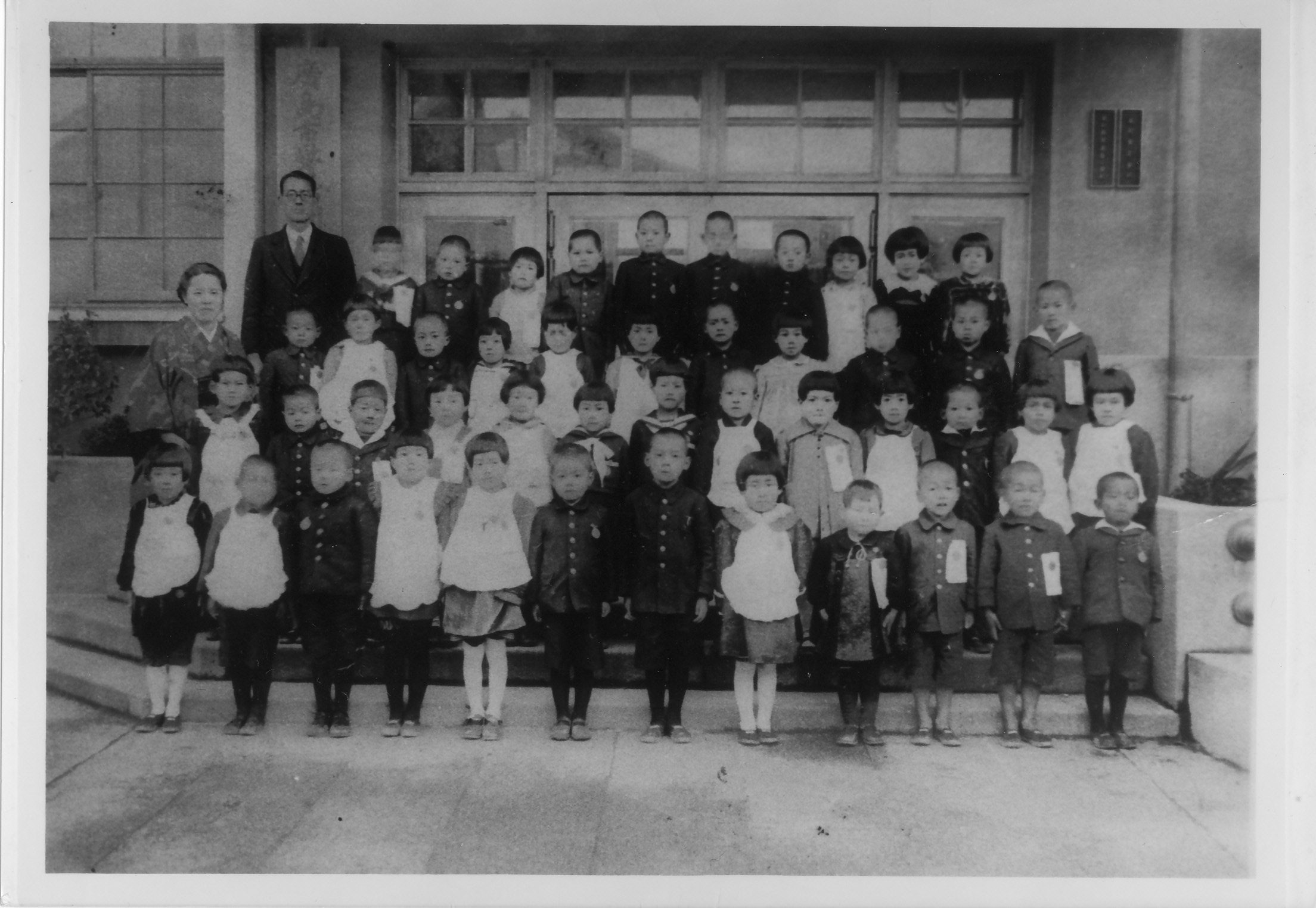 I was born on March 27, 1934, as the fourth child of Tomeichi and Satsuki Kawamoto. I had two brothers, Yoshitaro and Norihiro, and three sisters, Tokie, Michiko and Sachiko. Our house was in Shioya-cho (now Ote-machi, Naka-ku) 380m from the hypocenter. The Bank of Japan Hiroshima Branch was across the street from our house.

In 1945, my father, then 51, was a war veteran with a retirement pension and was working at a glazier’s shop nearby. In spite of his former career as a soldier, my father wasn’t very stern. He loved drinking and smoking. I remember my mother having managed very hard to get liquor and cigarettes after the rations started, due to the scarceness of daily goods. My mother, then 39, was cheerful and kind to everyone. Everyone in the neighborhood was her friend and called her “Ogo-san.” “Ogo-san” means “Mrs.” Yoshitaro, seven years older than I was, had gone to Manchuria. When he graduated from middle school in 1941, he told his parents that he wanted to go to Manchuria as a settler of the Volunteer Army Corps, which was to defend the borders and cultivate the land. It seemed that he was in a patriotic passion in his middle school after he saw a leaflet recruiting members for the Volunteer Army Corps in Manchuria. In those days, we were told at school, even when we were very young, to sacrifice our lives for the country because we would not have more than 50 years to live, even if we would live out our natural lives.

Our mother persuaded him to change his mind, saying that he wasn’t fit to be a farmer. Then he got a job at an electric power company in Manchuria and left Hiroshima for Manchuria. When Yoshitaro left for Manchuria, I was just in the second year in elementary school. I had never played with him. While he was in Manchuria for six years, he never came back, and I don’t remember having heard from him. He finally came back to Hiroshima almost two years after the war was over.

My sister, Tokie, five years older than I was, had started working at the management section of Japanese National Railways from April, 1945, just after graduating from girls’ middle school in March. Michiko was two years older than I was and in the second grade of Fukuromachi National Higher Elementary School (now the second year of junior high school). I was in the sixth grade of Fukuromachi National Elementary School, and Sachiko was in the second grade of the same elementary school. Norihiro was only four years old.

On December 8, 1941, the Pacific War broke out with Japan’s surprise attack on Pearl Harbor. Initially, the Japanese Army was dominant and advanced quickly and widely, but in the next year the war situation turned against Japan after the defeat in the Battle of Midway. By the end of 1944, the U.S. Army had built airfields on the Mariana Islands, and from there, started bombing Japan’s major cities. In the new year, air raids intensified. The number of firebombed cities rose to more than 200 by the end of the war. Meanwhile, ordinary citizens knew little about our army’s losing ground, and moreover, we were never informed that many cities throughout Japan were severely bombed. Japanese citizens believed that the Japanese Army kept winning, because all the news the Imperial Headquarters announced to us was favorable to Japan, such as “We shot down xx enemy bombers,” or “We sank the U.S. Battleship XX.” Children were simply delighted to hear such news, saying, “We are winning! We are winning!” There were no bad remarks among people, such as, “The Japanese Army has been devastated,” or “Japan might be defeated,” because military policemen were going around the city in a team of two or three, carefully watching citizens. They sometimes visited our elementary school and observed classes to check whether teachers were teaching children only necessary things. At school, we had drills a few times a month under the supervision of soldiers in which we practiced how to use bamboo spears.

In April 1945, the government decided to evacuate children from cities in order to protect them from the intensified air raids. All children from third through sixth grade were sent to rural temples and other facilities away from their parents. Children of Fukuromachi National Elementary School, which I went to, were divided into four groups and sent to four villages: Tako Village, Kawanishi Village, Wada Village and Kamisugi Village in Futami County (now Miyoshi City.) My group of 45 boys was sent to Zentokuji Temple, and a group of 32 girls went to Jogenji Temple in Kamisugi Village. To take care of the children, two male teachers lived with us and two female teachers lived with the girls. We were initially told that the evacuation would be only during the first term, until the end of July, and that we would go back to Hiroshima for the summer vacation. Later, the duration was extended to August 10. We were very disappointed to hear that. The evacuation cost each child 10 yen for the first term. Some children who couldn’t afford the cost remained in the city. Also, some children who had some relatives living in the country were sent to those relatives.

The necessities to live in our evacuation temples, such as futon mattresses, extra underwear, and mosquito nets, had been already sent ahead. So, we left Hiroshima lightly equipped with only our clothes. We were happy to travel by train and were in high spirits as if we were going on a school excursion. But our happiness was over after eating only rice balls as our supper. When night fell, the third-and fourth-year children started to cry, calling for their mothers. Gradually we got used to this living situation, and by June no child cried. The biggest problem at the temple was the total darkness at night. Moreover, there was no sound at night. When we had to pee at night, it was too dark and scary for us to go to the toilet, which was outside the temple building. So, we stood together along the edge of the verandah and peed on the temple grounds. In the morning, the grounds sometimes smelled very bad. Among us, there were some children who would wet their futon, which must have been troublesome for the villagers who looked after us.

Five village women were hired to take care of us, such as cooking three meals a day. A small bowl of cooked rice with miso soup and pickled vegetables were served as a meal at the temple. The cooked rice, however, was half rice and half barley and later soybean meal was mixed. I heard that the government had decided that the amount of rice used for one child’s meal should be 7shaku (approximately two-thirds of a cup or 130g.) We knew food was scarce in those days, but all of us were growing and required more food, so we always felt hungry. When village children opened their lunch boxes at school lunch time, they looked shiny because cooked rice was tightly packed in them. I was really jealous of them. I sometimes offered my pencil or my eraser to them to get some portion of their lunch in return. We sometimes ate raw wheat. First, we stripped wheat ears to get wheat and kneaded it by hand. While chewing it in our mouths, it became viscous and tasted fairly good. We also ate wild grass and young soybeans, which were grown on the footpaths between rice fields. It didn’t matter whether they were good or not. We were distracted from hunger only while something was in our mouths.

Leopard frogs were also good. Once about a month, the woman who cooked for us said, “Go and catch some leopard frogs.” Then we rushed to rice paddy fields to catch some. We prepared frogs by pulling the legs of those frogs apart, hanging them and skinning them. The woman cooked them for us by deep frying them. The frogs tasted like white meat of chicken. They were our precious source of protein. We ate locusts and grasshoppers, too. We pierced them on a bamboo skewer and baked them on the live charcoal of the cooking stove. They were good, too. We would eat anything as long as it was edible. Locusts were also our important source of protein. As for our laundry, the village women did that for us once a week. As soap was really scarce then, they did our laundry just by rinsing it in the river. Once a week, we made groups of several children and went to take a bath at nearby farmers’ houses.

We rarely studied at school in the village. Instead, we did some work, such as collecting pine oil from pine trees, clearing waste land to grow potatoes and sweet potatoes, and collecting edible wild grass, such as Japanese knotweed, long-stamen chive, water celery and field horsetail. To collect pine resin, we cut the trunk of a pine tree, hung a bamboo container right under the cut, and waited for a week. The collected pine oil was said to be used as fuel for planes. As for the collected wild grass, we dried them at the temple and ground them into flour to deliver to the government.

The village we lived in as evacuees took care of us until the last day of the evacuation, whereas some villages refused to accept the children or sent the children back to Hiroshima after a while because they couldn’t afford to have them in their villages. I heard that the children from Otake were sent back home in June. There was a rumor that a village tried to drive the children away home by scaring them with a woman standing by the toilet with a white cloth draped over her head.

Some children who wanted to go home tried to walk back home along the railway after sneaking out of their villages. But they were caught on the way by teachers and brought back to the villages. My father came to see me in the village in May and my mother came in June. I saw other parents who came to see their children.