5.Restart after a Debauched Life

I came back to Hiroshima for the first time in 12 years. One day, when I was walking around Nagarekawa’s busy streets, someone called me, “Kawamoto-san.” It was Tetsu, an orphan with whom I stayed in the same evacuation place and who was one year younger than I. He had become one of the leading members of the Uchikoshi-gumi yakuza syndicate. He put on the air like a gangster, wearing a stomach band over his shirt. He swaggered along with five or six henchmen in his territory. As I had a driver’s license, he helped me get a live-in job in a transport company. On paydays, the gangsters invited me gambling. At nights, I swaggered in the streets and gambled. If there was a fight, I was given a bamboo stick and brought in to help. I was cheered and told, “Hit him! Hit him!” I knocked down anybody I was told to. I didn’t have any friends except the gangsters. As all my old friends had joined yakuza syndicates and I admired the gangsters, I asked one of the groups to let me join them. But I was rejected. They said, “You are not suitable for yakuza. You are too gentle. It is impossible for you to join our group.” Two years later, I heard from one of his henchmen that Tetsu was stabbed to death in Shintenchi.

When I lost my money in gambling, I sold my blood. Tsuchiya Hospital which used to be located in Takanobashi, gave 1200 yen for two 200cc packs of blood. With that money, I could survive for 10 days. I sold my blood once a month and hung out without working. I only worked when I felt like it. When I got money, I used it for gambling. Since my company knew that I was connected to a yakuza group, they just gave me a job and salary even if I did shoddy work.

I had such an awful life for ten years. At around 30, I was given a traffic ticket and a fine of 2000 yen. I could not manage to raise that money. I was really disgusted with myself. I did not have energy to borrow money from someone to survive. I thought that I did not deserve to live. I decided to die, but not in Hiroshima. If I died here, I would be made a laughingstock. I decided to leave Hiroshima to die in a town where nobody knew me.

At Hiroshima Station, I had only 640 yen in my pocket. I could only buy a ticket to Okayama, so I got on a train and went to Okayama. When I started to walk from Okayama Station to die, I found a notice, saying “Wanted: Live-in staff” at an udon noodle shop. I thought, “Nobody knows me here. I might be able to restart my life.” Suddenly, my mother’s words came to me. When I forgot my homework, or got a very bad score on a test, she always said, “You can do it. The reason why you cannot is because you give up. Don’t give up until the end.” When I had a rough life, many religious groups urged me to join them, but what bounced me back was my mother’s words.

I made up my mind and went into the shop to ask the owner to let me work there. He didn’t ask me about my background and immediately hired me who had never used a kitchen knife. He said to me, “If you seriously want to work here, work hard.” I worked at that shop for three years and at a staff cafeteria of Tenmaya Department Store for five years. When I was 40, I started a wholesale business in boxed lunches and ready-made dishes with five of my friends. When I was 50, I set up business on my own. I left Okayama and established a food company based on Mizushima and in Kurashiki. At that time, convenience stores started to spread and boxed meals and packed dishes sold like hotcakes. My company had 50 employees. 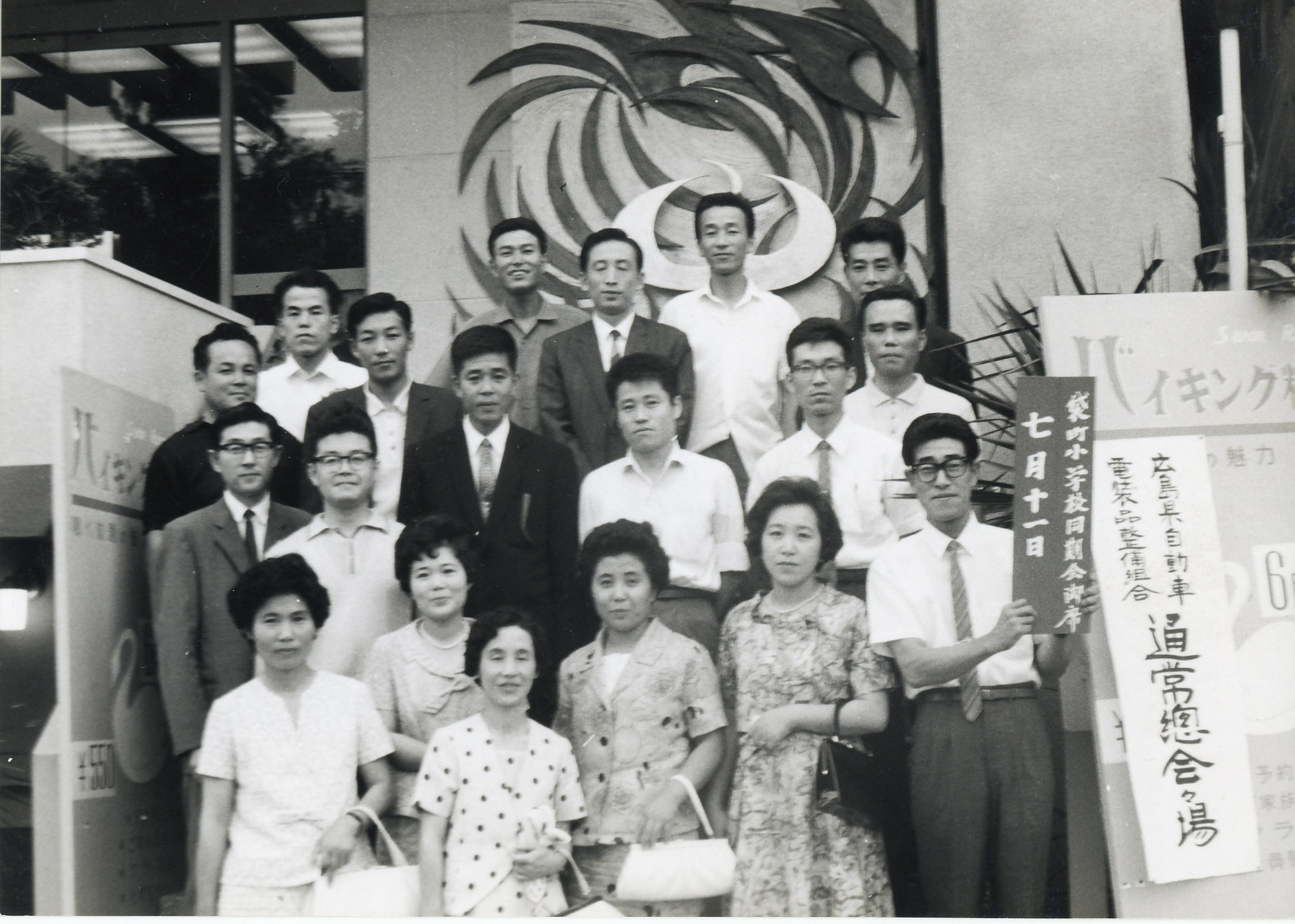 50th Commemoration Service of the A-bombing

At around 60, I got a phone call from Hiroshima. I had not called or written to anybody in Hiroshima for decades. I thought nobody knew me anymore. I answered the phone and heard a cheerful voice, saying, “Kawamoto-san, are you still alive? Everyone has been worried about you.” The person at the other end of line was Mr. N, who was in my group when we evacuated to Kamisugi village. Mr. N’s mother came to our evacuation temple to see Mr. N the day before the A-bombing. She missed the train to go back to Hiroshima and stayed at the temple on that night. Thanks to that, she could escape the bombing, but Mr. N felt guilty for the fact that only his mother escaped it. To have a memorial service to commemorate the 50th anniversary of the A-bombing, he went around asking for the whereabouts of all the then 5th and 6th graders and confirmed 60 of the 6th graders and 30 of the 5th graders. He went to the town office of Numata and confirmed where I was. I was so happy that someone remembered me.

Since then, for 20 years until the 70th anniversary, we got together once a year. In that meeting, I learned that other people also had a very hard time after the war. One of the women who was in the same grade as me, said in tears, “One week after the A-bombing, my mother came to my evacuation place to pick me up. At that time, my mother’s face was all covered by bandage except her eyes. I ran away from her, saying, “You are not my mother.” She gave up bringing me back and left the place. One week later, one of my relatives came to pick me up and said that my mother had died. I have kept blaming myself for what a thankless daughter I am. 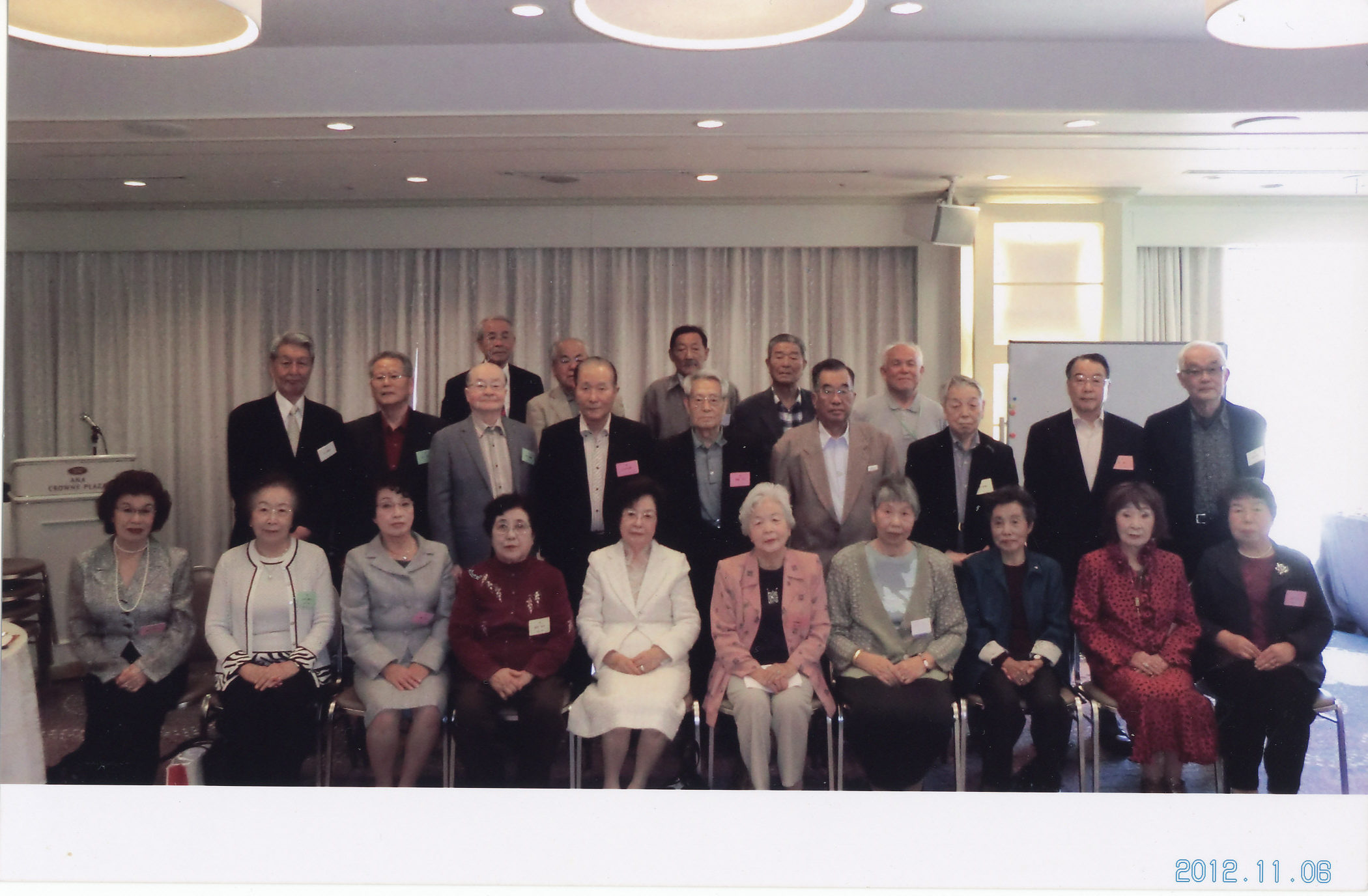 I decided to spend the last years of my life in Hiroshima where there were people who have the same experiences as me. I sold my company and came back to Hiroshima when I was 70. Soon after I came back, I participated in an amateur singing contest in the Nishi Ward Culture Center. At that time, the MC introduced me as an A-bomb survivor. Hearing that, one of the volunteers operating the contest asked me to talk about my A-bomb experiences. That person also worked as a peace volunteer in the Peace Memorial Museum. I had never talked about my experiences, but I decided to take on the offer. I talked about my experiences in front of peace volunteers at a meeting room of the museum. Emiko Okada, an A-bomb survivor who speaks about her experiences, was also there. After my speech, she said to me, “I would like more people to hear your story. Would you join us?”

When I went to the Peace Memorial Museum to take the lecture to be a peace volunteer, my memories came back. I found my legs gave way and I could not go in. I repeatedly thought I should not join the group. Also, I was shocked to see the displays in the museum. Although many materials related to the A-bombing were displayed, there was only one picture and a short explanation about the A-bomb orphans. The picture showed a shoeshine boy and the explanation read, “The number of orphans has been variously estimated from 2,000 to 6,500. The precise number will never be known.” When I saw that, I wanted more people to know the fact that there were many orphans who tried to survive by themselves although they were not exposed to the A-bombing. They could not go into their family graves, or their names were not recorded on the register in the Cenotaph for the A-bomb Victims. Even if they were washed away in the Makurazaki Typhoon in 1945, they were not included in the list of casualties. So, I have roused myself and talked about my experiences. I would like people to remember those orphans who have been neglected.

For the orphans who could not stay in the orphanage and were tossed out in the streets, the most important thing was food, how to get food. They had no choice but to rely on yakuza syndicates. Such facts have been deleted. I have no intention to praise yakuza syndicates or accept their existence, but the fact that the orphans were related to them just to survive is never erased.

Now, I am working as a peace volunteer. I have talked in the museum about my experiences and about orphans living on the streets. But some of my classmates at Fukuromachi Elementary School started to criticize me. Even my old friends who had encouraged me to come back to Hiroshima from Okayama didn’t want me to talk about them.

Opposition from my friends

I invited those friends to the activity as a peace volunteer, saying “At that time, we had to beat someone else to survive. Some had very difficult experiences, as they could not do anything even if they saw their friends dying. We feel guilty for having a normal life now. I would like to convey these facts to younger generations.” But here were some responses:

“I am married with children and grandchildren. They vaguely know that I was an A-bomb orphan, but they don’t know what kind of life I had. If you speak about the orphans’ lives, they will learn about my disgusting past.”

“I have not talked about my experiences to my children. I cannot tell them how I survived at that time. I was just 10 and nobody helped me. I had to find a way to survive by myself. I did everything to survive. I have taken food from others by force. I had no choice to survive. That was how I lived.”

I gave up on marriage after my marriage was opposed because of the A-bombing. I never wanted to have that kind of humiliating experience again. But all of my friends got married and have children and grandchildren. They said that if I talked about the orphans, their children would hear it and feel sad and unpleasant. They would think what wicked acts their parents committed to survive. My friends want to forget. I really understand them; however, we cannot forget. We cannot erase what happened.