Those days, I lived with my parents and my 93-year-old grandmother in Eba, 3.8 km. from the hypocenter. My three married sisters lived in different places. My younger brother, a fifth grader, was at a temple in Kisa-cho, Futami-gun, for school evacuation. My elder brother was a student of the Mercantile Marine School in Kobe.

I was a 13-year-old first year student of a girls’ school. Every day we had to perform labor service with no classes or summer holidays. Until the day before the A-bombing, I had been working outside demolishing buildings in Otemachi, near the hypocenter. On August 6, I took a day off and stayed home. It was a fine day. My parents were not at home, having gone out early in the morning to help demolish their friend’s house near City Hall. As I heard the air-raid all-clear siren, I felt relieved, thinking that we wouldn’t have any further fear of enemy planes coming. After clearing the breakfast table and washing the dishes, I finished airing the laundry in the garden and entered the house.

I was moving to the room which had 2.5-meter glass windows facing east. Suddenly all the windows in front of me became red. Well not exactly. It was a beautiful color like the sunrise mingled with orange. That moment I heard a big boom, the glass broke and the shattered pieces whizzed at me. The overwhelming power of the blast knocked me down and I lost consciousness for an instant. When I came to and happened to put my hand on my head, I felt it was slimy. I was hurt with the broken glass, but I didn’t feel pain. I thought I had to escape, and I hurried into the neighborhood air-raid shelter with my grandmother. Some neighbors were already there, but nobody knew anything about what had happened. After a while, I came out of the shelter feeling uneasy. Fallen roof tiles and plaster of houses were scattered around. Shortly after 9:00 a.m., a man in the neighborhood, who had been downtown, returned. He was so heavily burned and peeled that his face and arms looked pink. He shouted, “Hiroshima was terribly damaged. With a flash everything was destroyed.”

I Lost My Parents

I heard that adults and middle-school students, who had been at the city center for work, were taken to elementary school buildings used as temporary first-aid stations. I was becoming increasingly worried about my parents. I asked my uncle to go search for them, but he came back soon because raging flames blocked him from going any further.

My elder brother, who was living in Kobe, was on his way to Hiroshima that morning. He was exposed to the A-bomb near Hiroshima Station. As soon as he got home that evening, he went out to look for our parents. That night, hearing the news that Father had taken shelter in a relative’s house in Oko-cho, my brother went there and came back with him in a two-wheeled cart. My father, lying on the door board, looked dead. His face was swollen and his clothes were burned off, leaving him naked. His body was black and shiny. I could identify him just by his voice. We had no medicine, so we grated cucumbers and potatoes for a poultice. It dried soon, but we couldn’t replace it so often. When I touched him, his black skin peeled and the muscle appeared under it. His body was burned not only on the surface but also inside. He remained conscious and said with concern for his wife, “We were in Zakoba-cho. I tried to escape with Kichi but lost her. Please find her.” He wanted eagerly to drink water. At that time we were told that burned people would die if they drank water, so I lied to him that the water supply was cut off. My father loved drinking and saved beer in the storehouse. He pleaded, “If there is no water I want beer instead.” But I didn’t give him any drink, which is still my great regret.

All I could do was to fan him, because it was hot and flies could infest his wounds. The wounds festered and were crawling with maggots in and out. I hurried to the field for something juicy to give him instead of water. Luckily I found tomatoes there, and wrenched them off into a basket. Then I looked up and observed a weird scene there.

People, whose whole bodies looked whitish, had their hands up in front of their chests with something tattered hanging from them. They were silently staggering in procession toward the Military Hospital, looking like ghosts. I learned later that the tattered thing was their peeling skin and that the whitish look was caused by their bodies covered with ash.

My father breathed his last on the night of August 8, worrying about his little children and missing wife. So many people died and we could not use a crematory, so we dug a hole on the beach and cremated him by making a fire with collected boards and sticks. Much cremation smoke was rising up around us, and a bad smell was hanging over there.
My elder brother went out to search for Mother, but he couldn’t easily trace her. He learned that soldiers carried survivors by ship to first-aid stations in Saka, Ninoshima or Miyajima. Finally he located her name on the list in Ninoshima, but she died on the 8th and her body was already cremated. Her relic was just a small bag including some ashes and hair. My heart still breaks when I think of how helpless she was to stray from her husband and how desperately she wanted to come home, worrying about her family.

Days of Suffering Since Then

The next year I got skin eruptions all over my body and three big open sores on my right arm, which took more than half a year to heal. I suffered from lingering anemia as well. My life without parents was miserable. I barely lived day by day supported by my grandmother, brothers and sisters. It can’t be denied that because I was an A-bomb survivor I failed in some employment examinations and missed some marriage chances. Later I got married to another A-bomb survivor; however, my husband died of cancer when he was 35 years old. I call the A-bombing evil itself.

When I remember the A-bombing, tears well up. When I begin to talk about it, I feel a lump in my throat. However, I thought that on behalf of the dead victims, I, who survived, should do something. I had a video of my A-bombing story made in February, 2000. Since then, I have told my story to elementary school students. In 2005, I started telling my story of the A-bombing for the Hiroshima Peace Culture Foundation. I’d like to appeal for realizing a peaceful world without nuclear weapons. 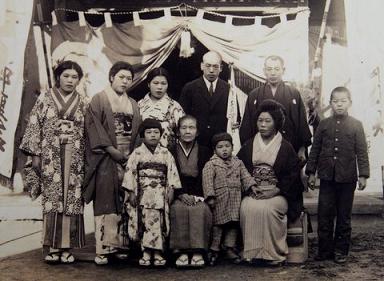 This family picture was taken in March in 1940 on the occasion of my eldest brother (the third from the right in the back row) going to the front. In the middle of the front row is my grandmother. I (at the age of 7) am next to her, and behind me are my three sisters. My mother is at the right end of the front row. (She died at Ninoshima Island.) My father is the second from the right in the back row. (He died on Aug. 8 after the A-bombing, though we did everything to take care of him.) To the right is my elder brother. The smallest boy is my younger brother. The eldest brother died in the war.